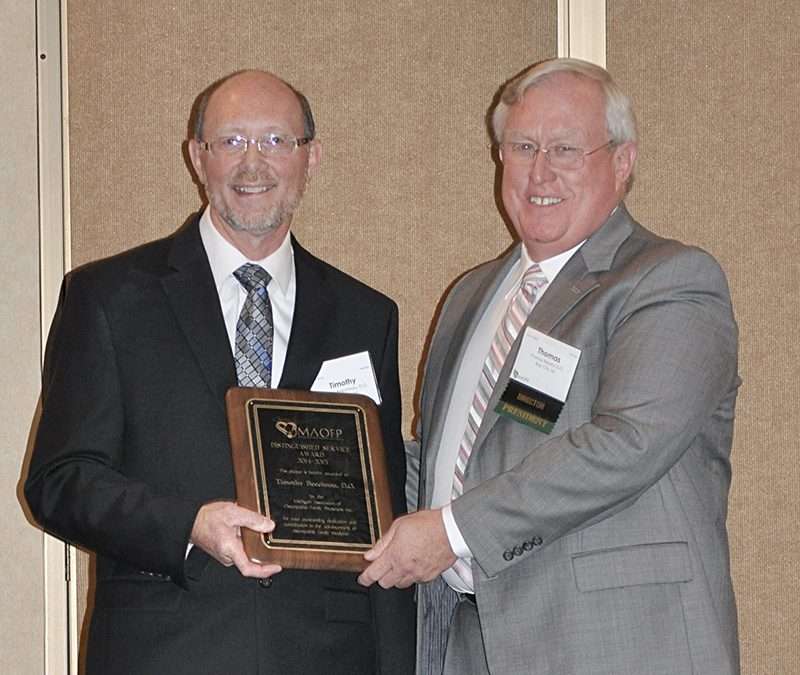 The Michigan Association of Osteopathic Family Physicians (MAOFP) has awarded the 2015 Distinguished Service Award to Dr. Timothy Beechnau.
This award is presented annually to one exceptional person who stands out in the field of osteopathy.
The prestigious Distinguished Service Award is given to an individual exemplifying “outstanding dedication to the profession by contribution to the advancement of osteopathic family practice in the state of Michigan,” according to the MAOFP. “The award winner demonstrates the highest qualities of professional and public service that have positively influenced osteopathic family medicine.”
Dr. Beechnau wins the award in his 33rd year of family practice, all in Ravenna.
Osteopathy runs deep in the Beechnau family. Dr. Beechnau’s son, Nicholas, who is also a DO, is a 2015 graduate of Mercy Health’s Muskegon Family Medicine Residency. Timothy’s father, Dr. Lou Beechnau practiced osteopathy in Ravenna for years, eventually having Beechnau Elementary School named after him. Lou also won the Distinguished Service Award, perhaps by coincidence, in his 33rd year of practice.
Dr. Timothy Beechnau has been instrumental in encouraging local students to pursue careers in osteopathic medicine. Four D.O.s and five doctors total have come from Ravenna school systems under Dr. Beechnau’s guidance, a high number considering the small size of the school system.
Dr. Beechnau received his Bachelor of Science degree in Microbiology in 1978 and his Doctor of Osteopathic Medicine in 1981, both from Michigan State University. He completed a one year internship at Grand Rapids Osteopathic Hospital (now known as Metropolitan Hospital). In 1982, Dr. Beechnau returned to his hometown of Ravenna and joined his father, Dr. Louis Beechnau, in family practice.
Dr. Beechnau is Board Certified in Family Practice and Osteopathic Manipulative Treatment. He has served as a Clinical Associate Professor for Michigan State University College of Osteopathic Medicine since 2005. Dr. Beechnau has served as Team Physician for Ravenna Public Schools since 1982. Dr. Beechnau was inducted into the Muskegon Area Sports Hall of Fame in June 2005 for his 23 years of service and dedication to Sports Medicine. Recently, Dr. Beechnau was joined by his son, Dr. Nick Beechnau, and together they continue to serve Ravenna and its surrounding communities.
Dr. Beechnau and his wife, JoAnn, reside in Ravenna, Michigan.
The Michigan Association of Osteopathic Family Physicians (MAOFP) is a non-profit corporation whose mission is to advance the standards of family practice in the field of Osteopathic Medicine and surgery in the state of Michigan. MAOFP works to encourage and improve educational opportunities for the training of family physicians and to promote and maintain the highest moral and ethical standards in the practice of osteopathic medicine.