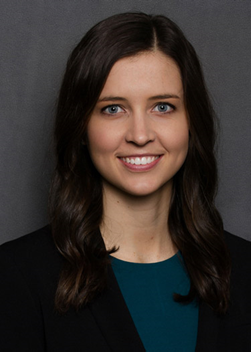 Fruitport High School grad Rachael Folkmier knew for years that she wanted to be a doctor.
After earning a bachelor of science in kinesiology at Michigan State University, she headed to MSU’s College of Osteopathic Medicine. Her dream was becoming a reality, and so was the huge debt that most students face with the high cost of medical school tuition.
Rachael received scholarships from the Osteopathic Foundation for $1,000 in both her first and second years of medical school. Along with helping cover her costs, she remembers, “I was filled with gratitude for the support and encouragement I received from Foundation board members.”
As a third-year medical student, Rachael was eligible to apply for the $10,000 scholarship named in honor of David Dora, DO, Osteopathic Foundation board member emeritus and Mercy’s long-time director of medical education. With her plan in place to specialize in family medicine and practice in her beloved West Michigan, Rachael felt she was a strong candidate.    “…I know with certainty this is where I want to be both for residency and as a practicing physician,” she wrote in her scholarship application. “The joy and wonder I have each day has made me feel as though I belong here.”
The scholarship committee had a competitive slate of candidates. Even so, they readily selected Rachael, in part because of her solid reputation among her preceptors and peers.  “It means so much to me to be chosen from the pool of wonderful candidates.” says Rachael. “This scholarship relieves a huge financial burden and reduces the amount of loans I need to get through school. It is very generous and it helps so much.”
Now in her fourth year of medical school, the last several months have reinforced Rachael’s commitment to family medicine.  “I loved every class, every rotation,” she says, smiling, “and I kept wondering which specialty would be best for me. Then I realized…the only place where I can do everything is in family medicine, which is what I love about it. I love the concept of caring for patients of all ages, having continuity of care, emphasizing preventative health, and seeing patients long term.”
Rachael is grateful for the teamwork and camaraderie she has felt as a medical student based in West Michigan.  “I have received a lot of encouragement here and met good people working hard for their patients’ well-being,” she explains. “It is all I could hope for from a medical community.”
To the Foundation and the board members who selected Rachael to receive the Dr. David Dora Scholarship, she offers warmest thanks, “…for supporting medical students, for giving us opportunities to apply for scholarships and to be involved in this community.”